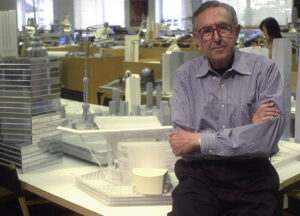 The life and work of  César Pelli, FAIA and Modernism, explained by Pelli, world renowned architectural critics and students.

The American Institute of Architects named him one of the ten most influential living American architects in 1991 and awarded him the AIA Gold Medal in 1995. In 2008, the Council on Tall Buildings and Urban Habitat presented him with The Lynn S. Beedle Lifetime Achievement Award.

Sebastian Neville, Cinematographer/Producer/Editor of the documentary will be at the event.

Thank you to the sponsors and to all that attended the event on  January 24th
at St. Thomas More, The Catholic Chapel & Center at Yale University.

Photos from the evening – Photo Gallery